The city of arid land, Bikaner is one of those historically significant cities. Not only the whispering desert winds but also if you wish to experience architectural excellence, you must visit Bikaner. Also, have you heard of the exclusive Camel festival in Bikaner?

Have you ever seen water pot race? No, I am not talking about those in movies where the diva shows her graceful moves, with water pots placed on their heads! If you want to see it for real, please cancel all your appointments for 12th and 13th Jan 2019. Those are the dates for the exclusive Camel Festival this New Year. There’s no alternative than this to make the beginning of 2019 special. 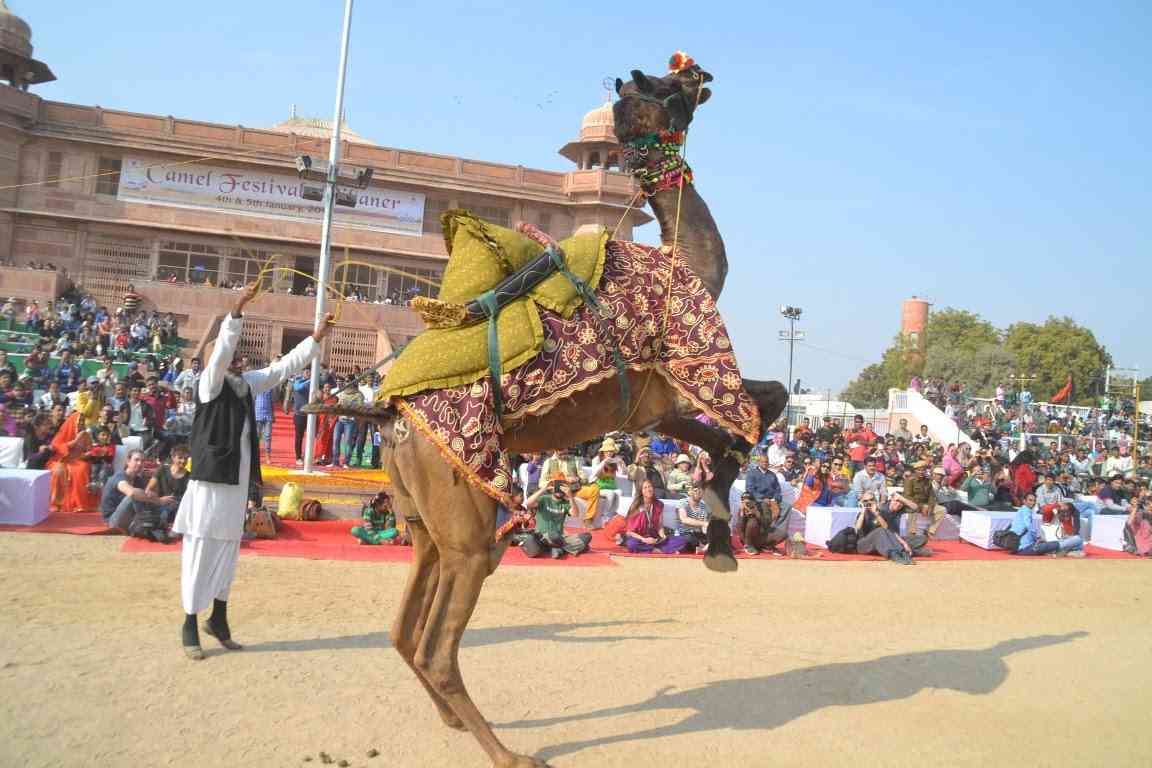 Why we Celebrate Camel Fair Festival

Camels are the toughest survivors ever, living amidst the sands and dunes where nothing grows! The ship of the desert was the only mode of transport as we have learn from history. So this festival every year is dedicated to these tough survivors by the people of Rajasthan, the only camel breeding place of the nation. To tribute them, they are decorated with colorful Rajasthani anklets, bridles and necklaces.

Have you ever seen a camel dance? Yes, you heard right. Parade and camel dance moves, in co-ordination with the orders from their owners, along with their neck-shaking rides are the major attractions. They are now a part of the army as well, Salute to the survivors!

Also Read: Things to Do in Bikaner with Maharaja Express

Also Read:   Which is the Best Luxury Trains in India?

Ship amidst the sand and dunes in Colors

Camel fair in Bikaner attracts tourists from across the globe. Guess why? From live wrestling of the villagers to water pot race, turban tying competition, tug of war along with camel dancing, camel painting competition where they are painted with intricate patterns and detailed artwork, fur trimming, you get to see it all.

You can also taste camel milk tea and sweetmeats along with other Rajasthan delicacies while enjoying the traditional folk music. You can buy handicrafts and pottery, traditional Rajasthani jewelry here.

Camel Festival in Bikaner is celebrated every year in the pleasant weather of January. In 2019, the festival start on 12th January and conclude on 13th January.

Tickets to the Gentle Beasts

An exclusive Camel Fair Festival, Bikaner is organized by the Department of Tourism, Government of Rajasthan every year in January. It’s open to everyone, so you just have to book your tickets to Bikaner!

Explore: Tips For Traveling With Kids Over Christmas In Maharajas Express Train 2018

How to Reach Bikaner ?

Bikaner has two railway stations Bikaner Junction and Lalgarh Railway Station. Both the stations are approximately 6 kilometres away from each other and are located within the city

Also Read:   Why Should You Visit Varanasi?

Apart from these trains, you can also choose the luxury trains such as Maharaja Express which is designed with historical saga of the nation takes you to the camel city with utmost comfort and luxury.

Journeys of Maharajas Express help you to explore Bikaner

Read On: A New Year’s Eve on The Luxurious Wheels; Maharaja Express Train

Jodhpur International Airport is your ultimate destination, all domestic and international flights connect here. From the air terminal you have to travel 235 km to meet the gentle beasts!

Bikaner is well connected to all metro cities by state transports, ac buses and taxis. Choice is now yours!

While packing your bags, don’t forget to take warm clothes and sunscreen owing to the dropping temperatures and harsh sun of the barren land.